On the 2nd of January 2011 in Tahir Square in Egypt a demonstration took place. Below is one of the widely disseminated pictures of the assembled crowd. 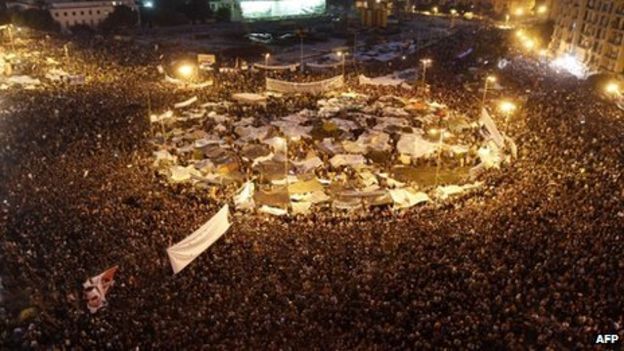 Now, while this picture isn't a picture of the whole crowd, it definitely conveys the impression that there were an awful lot of people there.

The question is 'Exactly how many people WERE there?'

According to Wall Street Journal there were 'hundreds of thousands' of people.

The New York Times says there were 'hundreds of thousands' of people.

Good. Consistency so far, then. Hold on.

Hmm. That's a big range there from the Washington Post. Way to sit on the fence!

Then things get interesting.

The Telegraph stated there was an 'estimated crowd of more than 1 million'.

The Associated Press reckoned there was 'more than a quarter of a million people'.

Al-Jazeera called it as being 'up to 2 million'.

Anyway, you get the point.

Same event. Same crowd. Same time. Same bat channel and so on and so forth.

So, why, pray tell, such disparity in the estimations of the crowd size then?

Come with me as I take you on a magical journey which should hopefully serve to enlighten you as to 7 reasons you can never trust quoted attendance figures for large events.

That's the truth of it.

Do YOU know how to estimate the numbers in a large crowd? You probably don't. But, to my mind, you're about as qualified as a lot of those who DO estimate such numbers.

The question is - do they know HOW to do this properly?

And even if they DO know how to do it, see the next point below. . .

The motivations of those reporting the figure has a major impact

Imagine, if you will, the following scenarios:

There's very little (if any) INDEPENDENT estimation / verification of attendance at large events.

Take figures with a large amount of table salt.

Paul Yip at the University of Hong Kong is active in researching the area of crowd estimation and is quoted as saying:

In the absence of any accurate estimation methods, the public are left with a view of the truth colored by the beliefs of the people making the estimates. The public would be better served by estimates less open to political bias.

People move. They congregate. They spread out. They do all sorts.

It all involves moving. They move a lot.

It's bloody difficult to do properly

To estimate crowd numbers properly requires a lot of things:

That's not all either. Point made, I hope?

Ticket sales are not an accurate count

Ticket sales tell you how many people bought tickets and presumably intend to go to the event.

It does NOT tell you how many people are AT the actual event.

So, while it can be helpful as a general guide, it is not the answer to the 'how many people were there?' question.

Beyond that there are other factors related to ticket sales that can very much skew the usefulness of ticket sales as an indicator of attendance numbers.

In our experience, depending on whom you speak to in the events business and what day of the week it is and in what alignment the stars are and who was going into the Celeb BB house and so on. . . the estimation of 'no shows' for an event can vary wildly.

We've dealt with promoters who have hired a venue and want to sell tickets beyond the number the venue can safely hold, on the basis of a 20% 'no shows' estimation. So, if the venue holds 2000 people and there are 2000 tickets sold, the promoter wanted to sell more tickets on the basis that 20%, or 400 people, would not show up (thus, being 'no shows'), which essentially would mean there would be room to put 400 more people in there. That very same promoter, in a different situation, has been known to estimate a much lower 'no-show' figure in order to strengthen his negotiation hand with a venue, when seeking to get a lower hire fee and better drinks deals for an event.

So, let's not rely on ticket sales to do our crowd number calculations, ya?

It's pretty much impossible to be 100% accurate

There is an element of error in ALL proper calculation systems for crowd size.

It's accepted that there will be a certain level of error. Many professionals will tell you that you're looking at a good, solid estimation of a crowd in the hundreds of thousands or low millions, as having an error factor of being 'within a couple of tens of thousands' of being right.

Let's be fair, to get as accurate an estimation of crowd numbers as possible would necessitate that professionals are doing it and they have at their disposal the best of equipment and resources.

This doesn't happen too often, if ever.

Even for things like Obama's inauguration in 2009, things weren't 100% and if they were EVER going to be, you'd imagine for an event THAT size, they would be.

Here's an excerpt from the Wikipedia page on The First Inauguration of Barack Obama.

No official count was taken of the number of people attending the inaugural ceremony, although multiple sources concluded that the ceremony had the largest audience of any event ever held in Washington, D.C. Government agencies and federal officials, who coordinated security and traffic management, determined the attendance count to be 1.8 million people based on information collected by several cameras and individuals on the ground. The Washington Post reported the estimated crowd size for the inaugural ceremony, and the National Park Service said it did not contest the estimate.[187][188]

Stephen Doig, a professor at Arizona State University, estimated that 1.1 million people attended the inauguration ceremony using the same satellite image. Although the image was taken a little less than 45 minutes before Obama's swearing-in ceremony, Doig adjusted his estimate to include people who were still arriving in the area before the event.[189] In spite of his crowd estimate, Doig stated that "if I had to bet, I would say the [Barack] Obama crowd is in fact bigger than those that showed up for [Johnson] or any of the other things ... I'm wholly prepared to think it was the largest crowd."[187] Approximately 1.2 million people had attended the second inauguration of Lyndon B. Johnson in 1965.[190]

Amid the massive crowds that arrived at the U.S. Capitol for the inauguration, about 4,000 ticket holders were unable to gain entry to reserved areas on the Capitol grounds after security personnel closed the gates at the start of the formal ceremony. Many ticket holders were stuck in underground tunnels where pedestrian traffic was directed to and from the National Mall. NBC News dubbed one such tunnel "the Purple Tunnel of Doom," after the purple tickets that would-be viewers held.[191] Others remained stuck in long lines as they waited to gain entry to the reserved areas.[192][193][194][195][196] Senator Dianne Feinstein, in her capacity as chair of the Joint Congressional Committee on Inaugural Ceremonies, launched an investigation to address complaints by the affected ticket holders.[197] The committee later announced that ticket holders who were unable to enter the Capitol grounds to view the ceremony would receive a copy of the swearing-in invitation and program, photos of President Obama and Vice President Biden and a color print of the inaugural ceremony.[198]

So, as you can see there's a lot that comes in to play when these figures are being arrived at.

If you want the most accurate ones, then get in touch with us here. We have the experience in calculating these things and give him / her the tools and resources to be as accurate as possible.