Author / Mark Breen
Parade events can be among the most challenging types of events to plan and manage. They present some very particular challenges, resulting in some significant hazards and risks.

Here in Safe Events & Cuckoo Events we're deep in the planning of 2 large St. Patrick's Day parades taking place next month, as well as multiple other events on the same weekend. With that in mind, we decided we'd take a look at parade events and the safety considerations that accompany them.

Parades happen the world over and can regularly draw crowds into their hundreds of thousands. Parades can be among the most creative and exciting events to watch and enjoy as well as to plan and run.

That said, they are an event possessing their own unique characteristics that can present a range of challenges to us as event organisers.

The first major challenge posed by parades is that they make us as event organisers and, in particular, safety-conscious event organisers do something we not generally happy to do – mixing pedestrians with moving vehicles. The risk posed here is obvious but, as with most risks, it can be managed and made reasonably safe.

We work with Fingal County Council on a lot of their events, including multiple parade events each year. They're a great client as they're very progressive in their thinking and they are always looking to put on great events but won't compromise on safety. We've worked with them to develop systems unique to each of these parades to seamlessly and safely merge vehicles and pedestrian participants so the parades effective and enjoyed by all.

Another of the challenges is that the involvement of children is often integral to a parade event.  The risk here is that children are more inclined to be caught up in the excitement of being part of an event and are generally less likely to take direction and structure. This can make it tough for us as event organisers to ensure they are safe while partaking in and enjoying the parade.

From a practical planning perspective, the coordination and logistical challenge presented by organising multiple large groups of children and other participants for a parade can be quite challenging. We have members of our Team that are very good at it and get set this task year on year!

We’ve learned a lot in our time to date planning & managing parades. These have ranged from Dublin Pride parades with 25,000 participants and hundreds of thousands watching, through to smaller St. Patrick’s Day parades with only 3,000 participants, mainly children, and 30,000 people watching.

We approach them all the same way and there are some key elements common to them all. We've learned many lessons over the years and have distilled some that learning down into the following Top Tips:

Separate your vehicles and pedestrians for as long as you can.

We always plan to have the vehicles stage (assemble) in one location and the pedestrians to gather in groups elsewhere.

Often these locations are very close to one another but still maintain that important separation so we cut down on the issues encountered when crowds of people including children mix with (often large) moving vehicles. When possible we carry this over to the far end of the parade, having vehicles and pedestrians finish the parade at different points.

Insist that representatives from participant groups attend a briefing in advance of the parade.

This affords us as event organisers an opportunity to impress upon the groups the importance of certain systems and procedures in place for the parade. It is also a great chance for the participants to ask questions to make sure they understand what to expect and what’s expected of them.

Divide your parade route into zones.

Do this and assign responsibility for the safety of the participants and spectators in each zones to a Zone Safety Manager.

We find that this allows people to get to grips with their zone and understand its unique challenges and key points, rather than having to understand the whole route and all its nuances. We've developed our Event Team to be adept at filling these roles on parade events and it makes running them.

Below is a slide from an EMP presentation for a parade event we run. 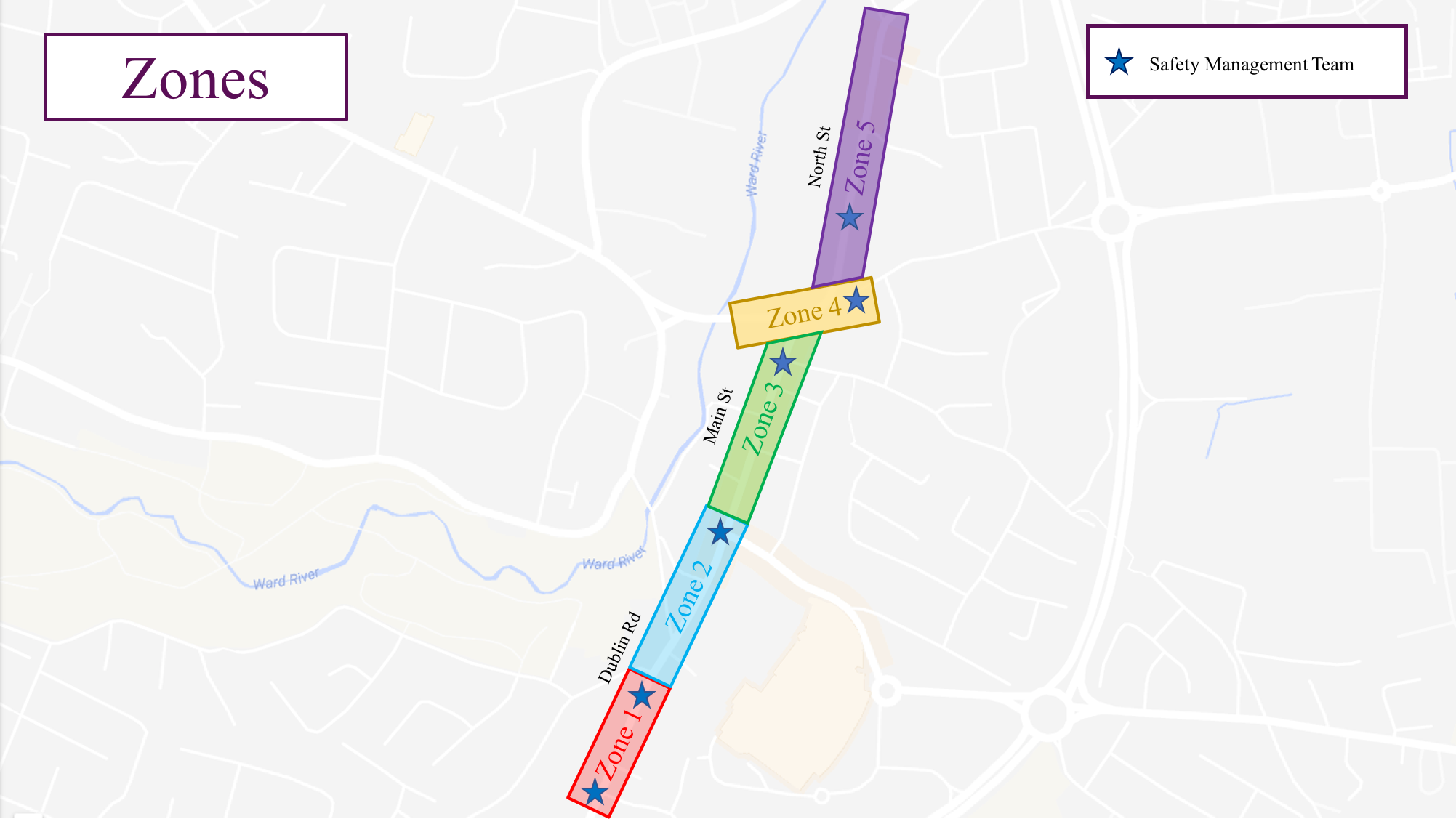 Instruct participants not to throw things from vehicles into the crowd.

We’ve seen this go wrong in a variety of ways. Sweets being thrown out to the crowd fall short and a child tries to squeeze through the barrier to retrieve it and gets stuck.

Other times children have rushed forward into the path of parade vehicles to get free promotional items being given out. The safe way to facilitate this is for the parade group to have walking participants interacting with the crowd and handing things out directly, rather than throwing things from a distance.

Have a system in place to ensure vehicle safety.

The biggest issue we run into here is community groups, sports clubs etc. using long flatbed trailers on which they position children and adults, often interacting with a themed set.

Also consider power being used on / in vehicles. Parade floats often use generators to power music etc. so it's important to check these. For instance, as you can see in the picture below, we discovered a parade vehicle using a petrol generator in the back of a van for a DJ. All the doors were open, allowing the petrol fumes out and into the crowd. 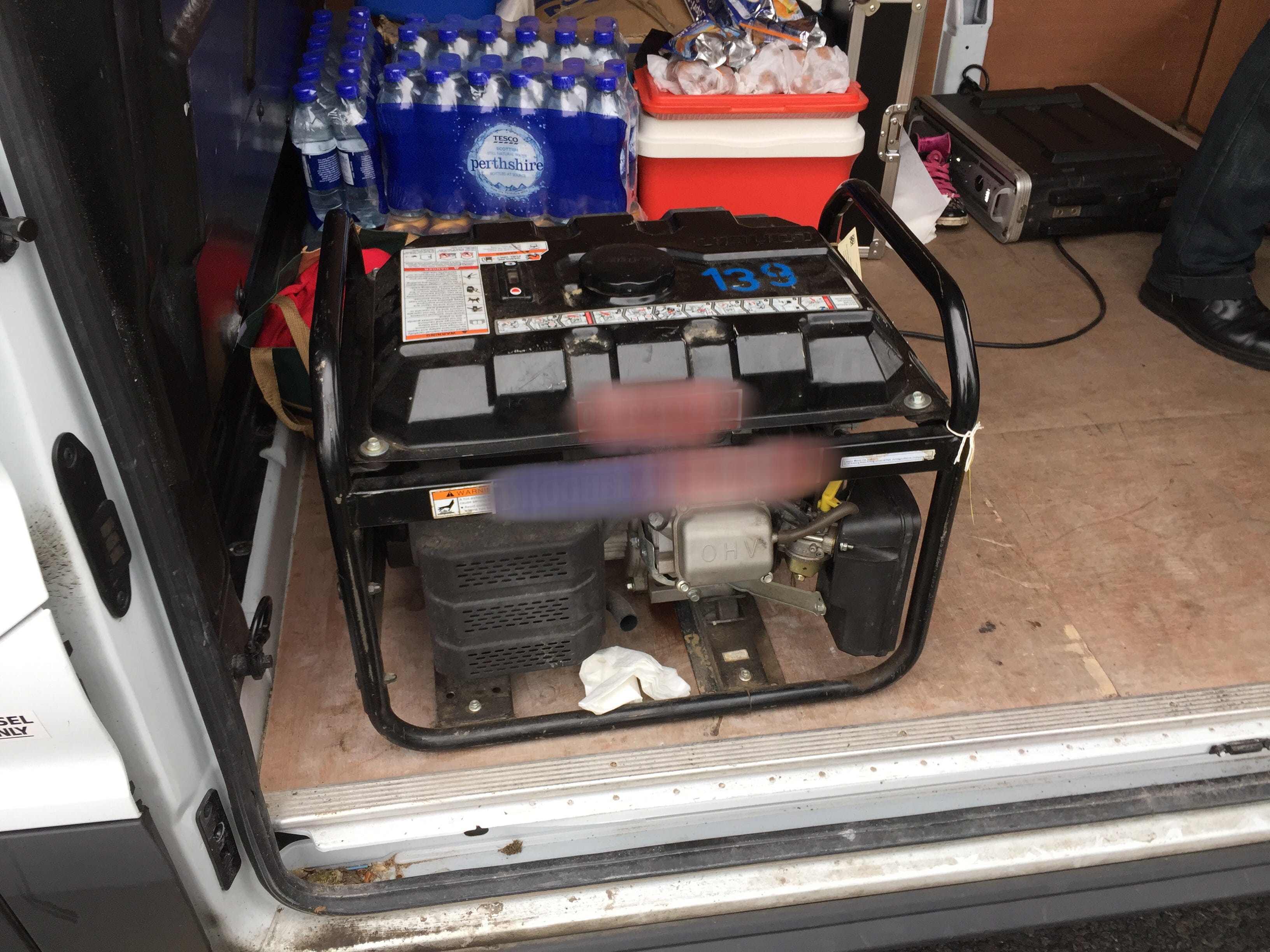 DISCLAIMER: We're not saying these are amazing. We're simply saying they exist. You may find them useful.

[PDF] Top 12 Things To Include In Parade Safety Plans

Parades are a very particular animal and, as such, are best planned and run by people with experience of working on them.

There are a number of challenges unique to parades, some of which can have a big impact on how well your parade goes.

If you need a hand with Risk Assessments, Event Management Planning, Staffing or anything along those lines then get in touch.