Are Vehicles Appropriate As Hostile Vehicle Mitigation (HVM) For Events?

Author / Mark Breen & expert contributors
I started a conversation on this topic on LinkedIn recently and got some valuable expert perspectives from event professionals around the world. We decided to put this article together to capture and share those perspectives.

I posed the question on LinkedIn after reading a Request for Tenders (RFT) document put out here in Ireland that mentioned a potential requirement for HVM for the event and specifically mentioned the use of ambulances as HVM.

That ambulances were mentioned made me think they'd likely been using ambulances as HVM for the event previously.

This is a topic that comes up in international #eventsafety and #crowdsafety circles quite regularly. I decided I'd put the question to my network over on LinkedIn, hoping to get some expert input from a range of event professionals.

Below you can see the post that stimulated the conversation. 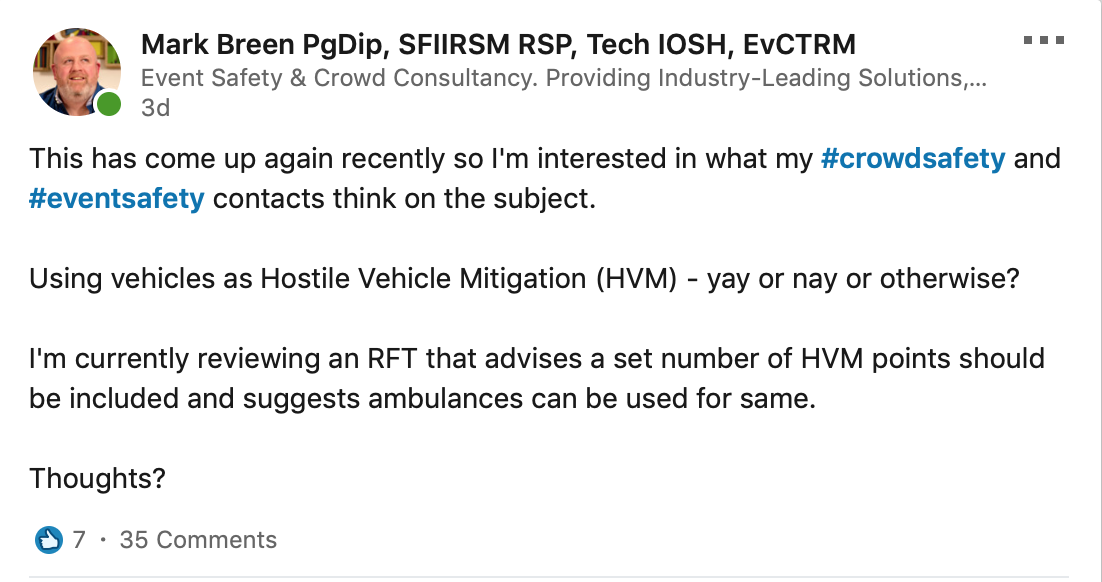 For some of those commenting on the LinkedIn post, the use of vehicles as HVM for events is completely unacceptable.

Terry McElvaney was quite clear in communicating his perspective.

Others were accepting that vehicles had their place here but acknowledged there was a lot to think about.

Edward Fisher sees them as a temporary solution until a more permanent one is found.

For others who engaged in the post that felt there is perhaps a place for vehicles as a genuine Hostile Vehicle Mitigation option, a wide range of key considerations were mentioned repeatedly.

They include those included below.

This echoes my consistent mantra when it comes to #eventsafety and #crowdsafety for events - all decision-making should be driven by risk assessments undertaken by competent, experienced event professionals. Whether we are considering HVM or barrier types, capacity calculations or equipment testing, risk assessments should be at the heart of everything we do.

Many professionals who responded to the LinkedIn article made this exact point. There can be a place for vehicles as HVM, perhaps as a visual deterrent when a risk assessment demands it, providing their use has been risk-assessed.

The concept of proportionality is inextricably tied to the risk assessment consideration above.

Many people touched on this in their comments and it's as simple as considering if the response (potential deployment of vehicles as HVM) is proportionate to the risk of a Vehicle-as-a-Weapon (VAW) attack.

The point being that if there's an informed, credible threat of a vehicle attack, then properly rated HVM (PAS 68, IWA 140) might be the way to go.

Alternatively, if there is an extremely low risk of a vehicle attack, assessed by a competent, experienced professional, but perhaps a visual deterrent would be useful, then perhaps vehicles may be an option.

For some engaging in the LinkedIn conversation, this is a vital consideration. Custom-designed HVM solutions are rated to PAS 68 and IWA 14 and similar. which means their stopping power is tested and known.

How do we know what a 2019 Euro 6 Mercedes Enonic 2630, Dennis Eagle Olympus, with a Beta 2 Trade Binlift and a Gross Vehicle Weight (GVW) of 26,000kg bin truck used as HVM will stop? Will it stop an Opel Astra 1.8i 16V Sri 3D going 65kph if it impacts directly to the offside of the cab? Will it even slow it down if it's got a reinforced steel frame or if the boot is laden down with weights?

Is it realistically possible to have answers to the questions above and, if not, then should we be using them as HVM?

Adam Roberts, with whom I worked on the Isle of Wight Festival in 2018, was one of many experienced professionals to accept that vehicles may have their place in a HVM strategy for an event, but queried whether ambulances are appropriate to use. 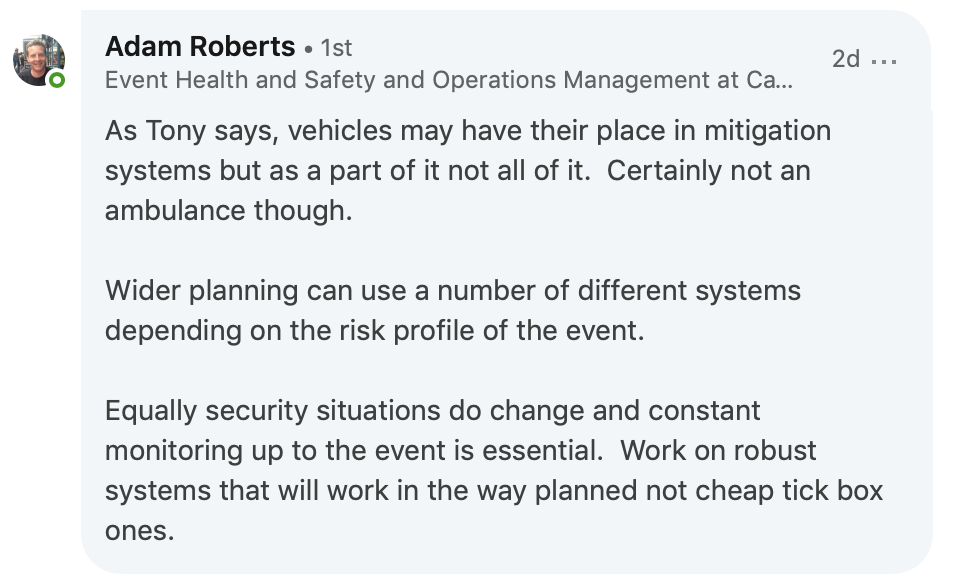 As mentioned above, the use of operational ambulances or emergency vehicles was a concern, and rightly so.

There is little logic to utilising an emergency vehicle that, by the very nature of its reason for being at the event may need to move elsewhere at any time, as HVM. You're failing from before you even position it in that instance.

There is also the issue of the inventory on board the ambulance and whether any treatment gases etc. would be dangerous to place in the way of a potential attacking vehicle.

One very practical consideration of vehicles as HVM is the fuel load of that vehicle.

If a vehicle with fuel on board is impacted, at speed, by an attacking vehicle, then the risk of explosion and fire is considerable. This risk has to be weighed against the potential benefits of its utilisation.

Management protocols that would see that file load minimised should be considered and people would be made to understand the reasoning behind those protocols and how important it is that they be implemented.

Another important consideration is that of positioning of the vehicles if they're being used as HVM.

I've seen firsthand the flawed positioning that can be employed when vehicles are used as HVM. This is particularly important when the vehicles are positioned on an emergency route. In this case it is critical that they can be moved readily.

One of the key management elements of vehicles being used as HVM at events is that the driver must remain with the vehicle at all times. The thinking is that the vehicle can be moved if needs be, which can be important depending on where it's positioned. For instance, it may be on an emergency route. So, the reasoning behind the driver staying with it is obvious, but is there more that should be considered. . . ?

What about the inherent and clearly acknowledged risk to that driver? They are actively being put in harm's way in a position where our risk assessment has presumably decided there is some level of risk of a vehicle attack. Is that fair to them?

As Eric Stuart noted, have we considered the risk of an attacker overpowering / killing driver and then having vehicle to use as a weapon? Our vehicle. That we put there. Possibly with a load of fuel.

The question of where legal responsibility might lie should a VAW attack be perpetrated was raised numerous times.

Could the owners / operators of the vehicle used as HVM, which would be damaged and potentially destroyed in a vehicle attack, go after anyone for legal redress? Who might they go after?

This is definitely worth considering.

Some very interesting points around the insurance considerations were raised by Cary Nightingale, Chris Hannam, Eric Stuart and more, including Eric's point below. 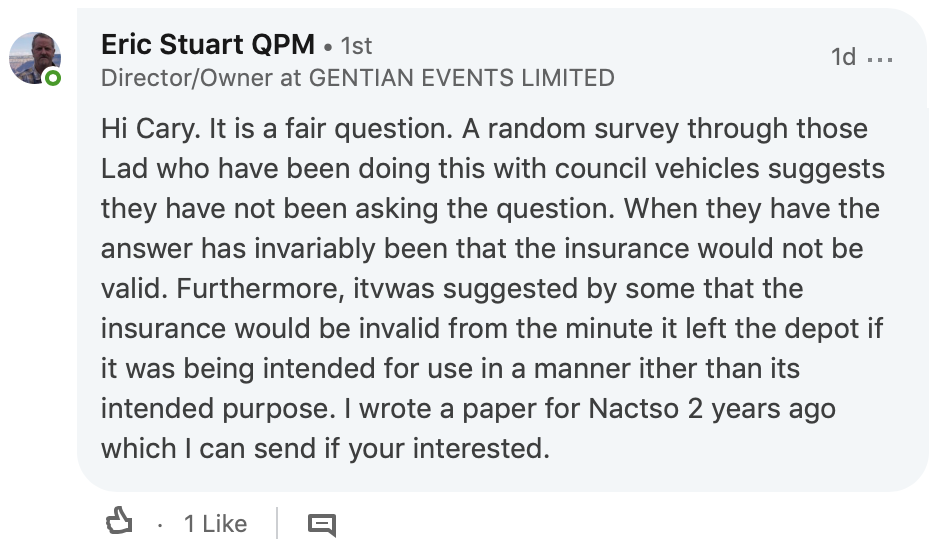 This is an interesting consideration and one, I imagine, that is not easy to fully tease out, for many obvious reasons.

How much time do YOU need to spend considered VAW attacks and the use of HVM for YOUR particular event?

Many feel the answer to the above is entirely event-specific, set within a national framework i.e. threat levels etc with the key point of understanding being that YOUR event is not necessarily at any greater risk of a vehicle attack simply due to the increase in vehicle attacks globally.

So, perhaps, as Chris Hannam alludes to below, your focus is better placed elsewhere to have more of an impact on ensuring the safety of your attendees.

Risk-assessing events from a Counter-Terrorism perspective is considerably different to the approach we take to Risk Assessments as Safety Officers / Consultants.

In the UK there are Counter Terrorism Security Coordinators (CT SecCos) within the police force, whose role is is to develop a holistic security plan with a view to minimise, manage and mitigate risk in respect of a policed event or operation in support of a Gold Commander's strategy. They are there to advise on particular threats and can be a significant resource for event and festival organisers.

We do not have a similar resource here in Ireland and many countries do not. That can make it difficult to make informed decisions based on the risk picture for your event.

Martin and I in here are trained and certified Event Counter-Terrorism Risk Managers. You can read about that course and our experience on it here.

The use of HVM should be risk-assessed by a qualified, experienced and competent Crowd & Event Safety professional. The type of HVM to be deployed (vehicle, proper rated HVM or otherwise) should be informed by a risk assessment.

Daryl Jarvis wrote a guest article for us on the blog entitled Hostile Vehicle Mitigation Tips for Event Organisers. Have a look if HVM comes under your purview and you're interest in some experienced, expert tips.

Coincidentally, a LinkedIn contact was on a trip to New York during the time this conversation was happening on LinkedIn.

He witnessed a HVM operation being put in place by the NYPD. He observed a senior NYPD officer instruct a patrol officer to change the angle his vehicle (being used as HVM) was positioned at and also noted with interest the distance between the full road closure and this HVM point. You can see the positioning in the picture below. 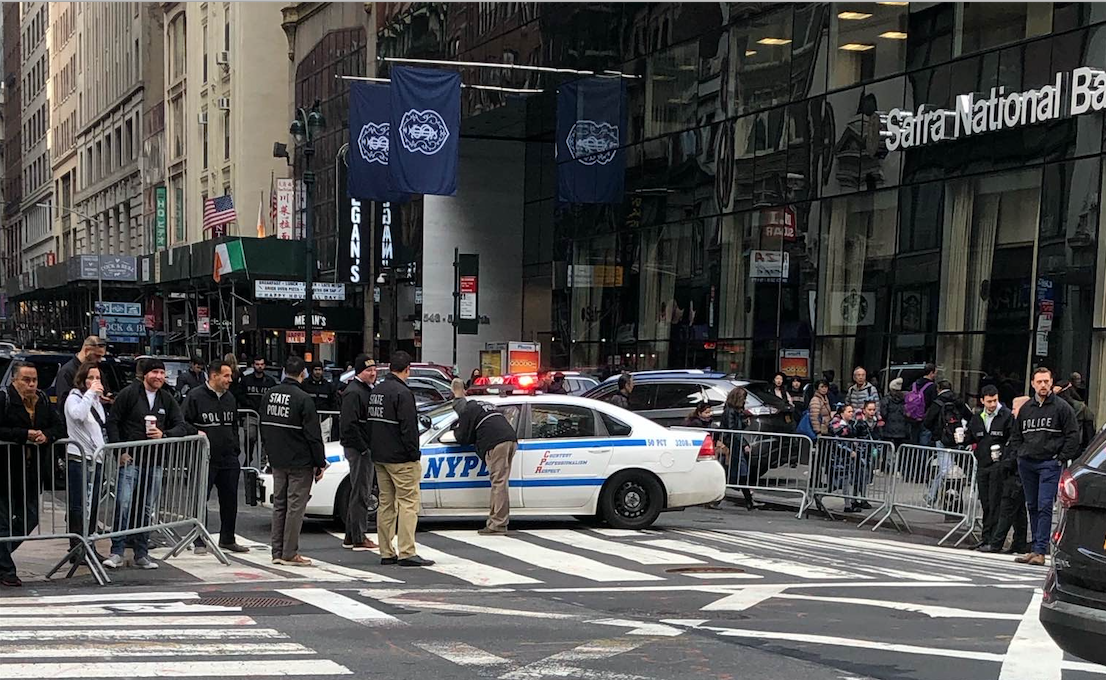