Mother & Daughter Reunited Thanks To Our FREE Wristband

Author / Mark Breen
We've been providing our Lost Child Wristbands for FREE for over a year now. We've had numerous people get in touch when the wristbands have proven useful. Here's one particular story of a mother & child being reunited thanks to our wristbands.

We had a number of groups get in touch with us looking for some of our Lost Child Wristbands to use during the recent events as part of the Pope's visit to Ireland.

In particular, people wanted them for the mass event in the Phoenix Park, for which anywhere from 125,000 to 500,000 people were expected. Tickets were free. You just had to register for them. Either way, it was going to be a large crowd.

Mairead (her real name) got in touch and we sent her out around 50 wristbands to use.

She then got in touch a few days after the event, sending in the mail below. 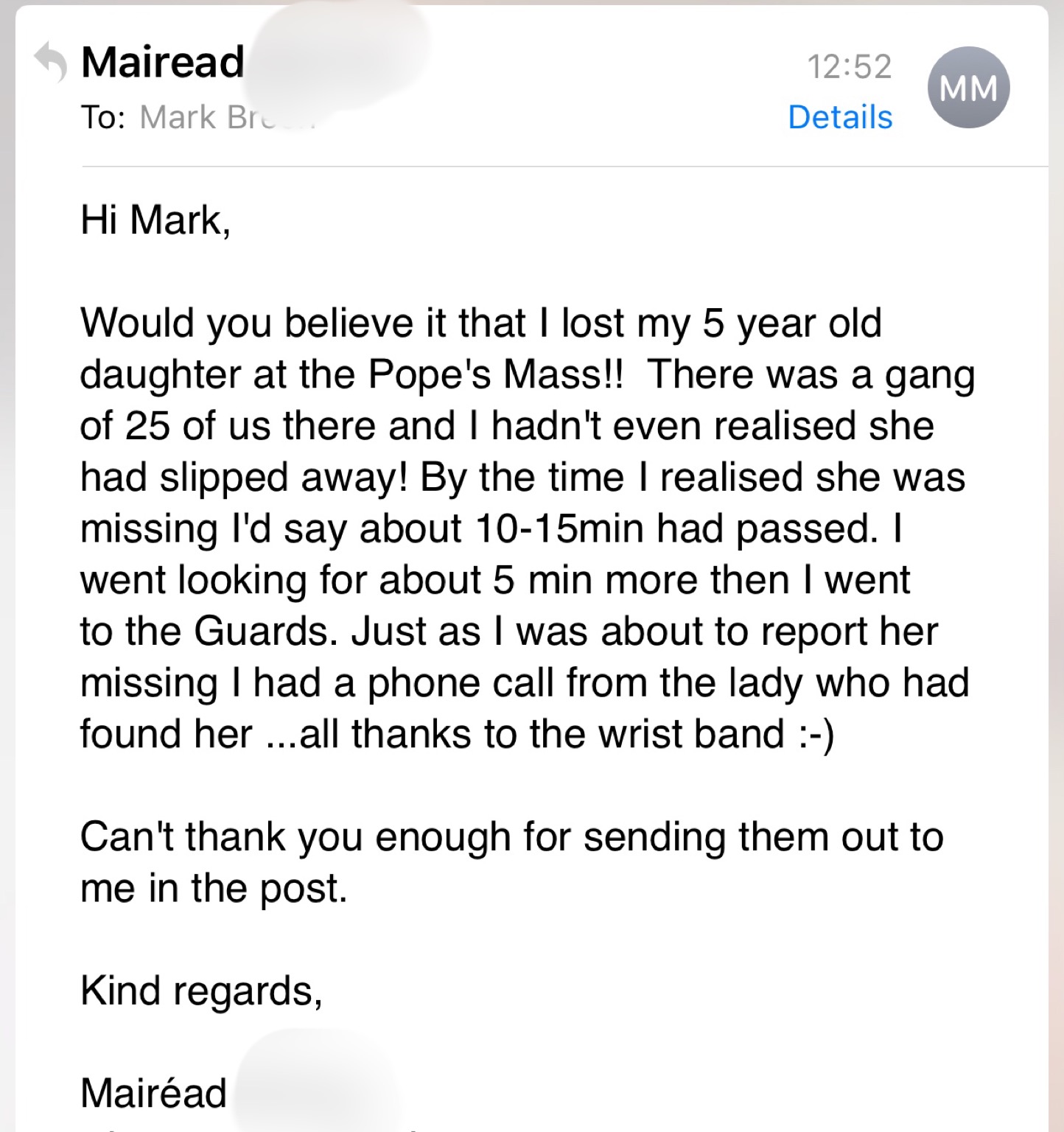 I responded to Mairead, saying that I was delighted the wristband had proven useful and thanking her for letting me know so.

She then replied with a longer recounting of what happened.

With her permission, I've included the details below verbatim.

We were in a rush leaving the house and all the kids and buggies got one (there were 13 kids aged 0-6 with us!) It was only when  I was walking into the park that I realised I hadn't explained to her what it was for. So I told her that if she couldn't find me to show it to a lady or a Garda.

Anyway as the Pope was doing his rounds in the pope mobile we lined up to see him. Then we all went back into our section but she thought we were "going to mass up the front" so she made a bee line for the alter . I hadn't even realised she was missing at all until my sister pointed it out to me about ten minutes later that she wasn't in the group (shame on me!!). When my daughter realised she couldn't find me or her way back to me she went up to a lady ... but didn't want to talk to a stranger ...so just showed her her wrist band without saying anything.

In the mean time I had approached the Guards and just as the  search of the immediate area was beginning with the guards, I saw I had missed calls. The mobile network at the event was patchy and it took me about 5 min to manage to text the caller back because calls wouldn't connect. I knew once I saw the missed calls that she had been located.

So having the wrist band was brilliant but also telling my child what it was for was vital. Otherwise it was hidden under her sleeve and I doubt anyone would have looked to see if she was wearing one. It would be great if they became common place at big events then if anyone finds a straying child in future it would be automatic reaction to check their wrists. On a separate note I'd recommend everyone put a landline number on it too as a back up as at such big events signals etc can get jammed.

So once again, thanks so much. I didn't panic at all when I realised she was gone because I knew she was too sensible to go off willingly with someone, I knew we were in a family crowd and I knew her wrist band would work!! Without the wrist band... there defo would have been panic and tears!

I'll be promoting them to everyone for sure!

As Mairead mentioned, explaining what the wristband is FOR is key to their effectiveness.

Children or, indeed, adults wearing them need to be instructed as to how to make use of them if they do get separated from their group.

What Mairead had done - instructing her daughter to approach a member of the Gardai (police) or a lady in the crowd and to present the wristband with the phone number on it clearly worked well in this case.

We distribute these wristbands for free. We spent money getting thousands printed and we incur postage costs every time we send them out to people. We've sent them as far as Australia already.

It's not a lot of money, especially when we hear of them doing exactly what we'd hoped they'd do.

You can read more about them here and you can request some here.